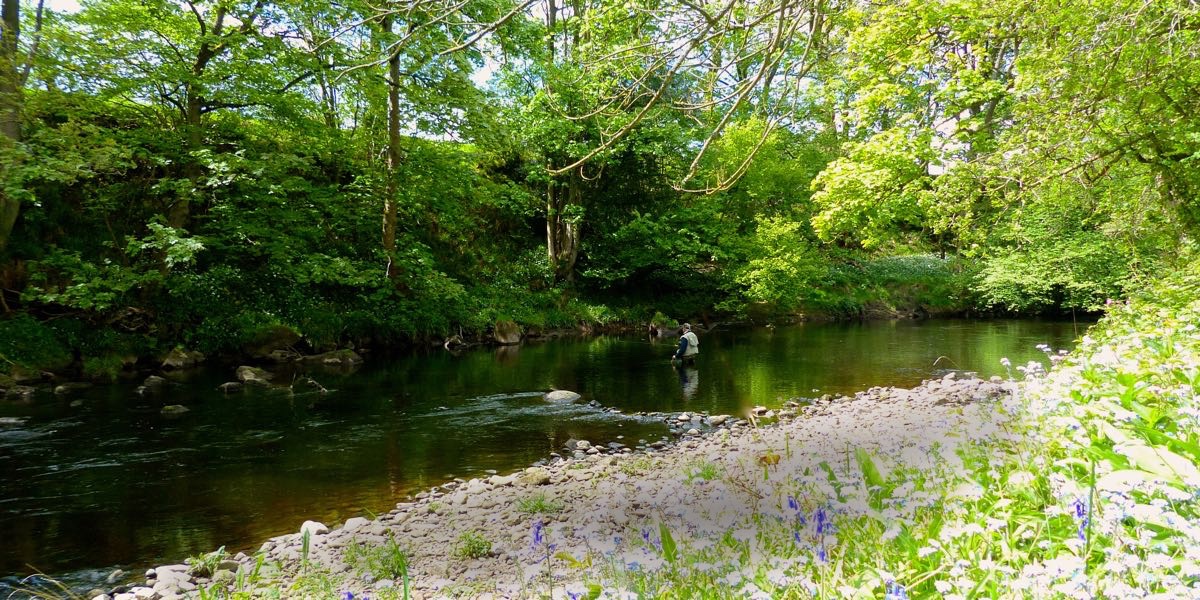 June on the River Nidd & the chance of a Mayfly hatch! 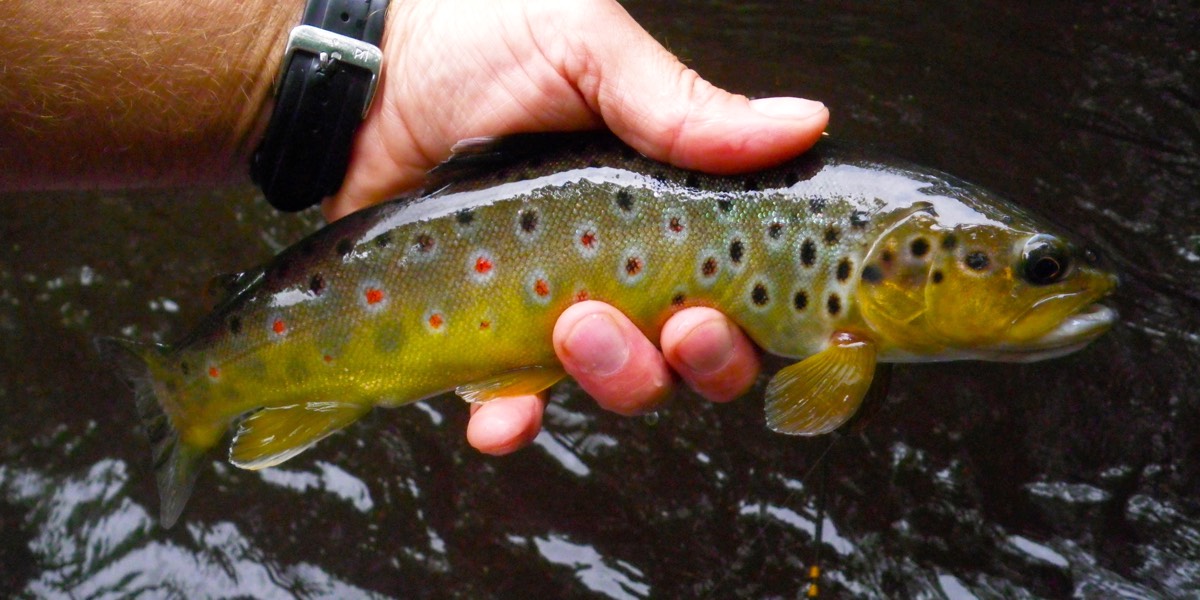 A Well Spotted Wild Trout From The River Nidd 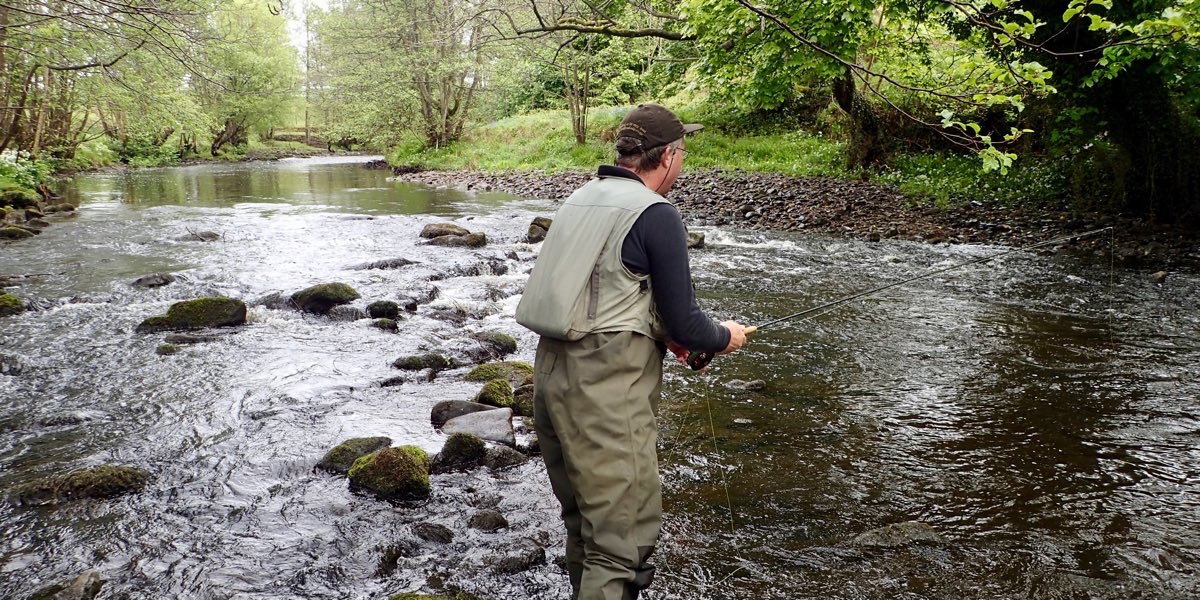 Flyfishing near New York on the River Nidd

Grayling extend the season on the River Nidd through the winter

The rain fed River Nidd has its source high up on Great Whernside and the surrounding fells, which separate Nidderdale from Wharfedale. The substrate here is peat and this gives the River Nidd its characteristic "Yorkshire Bitter" colour. The infant river then flows through Angram and then Scar House Reservoirs, before quickly dropping into Upper Nidderdale.

The Nidd here is small, shallow and rocky, often disappearing underground and resurfacing downstream. Further down the valley the River Nidd flows through Gouthwaite Reservoir, which is the only lake in England that has a wild population of Grayling, however, the fishing here is in private hands. It is as the River Nidd leaves the confines of Gouthwaite Reservoir that Nidderdale Angling Club's fishing starts and continues, almost continuously, to Dacre Banks, some 7 miles downstream.

For much of its length the river flows under a canopy of alder trees, which provide a good source of terrestrial insects for the Brown Trout and Grayling, and also prevent the aquatic flies from being blown away from the river. The River Nidd has excellent fly life with all the common rainfed river species present in good numbers, including Large Dark Olives, Blue Winged Olives, Medium Olives and a good selection of Stoneflies, Caddis and Midges. Also, quite unusually for the Yorkshire Dales, the River Nidd gets a very good hatch of Mayfly in late May/early June.

Our stretch of the River Nidd has a good population of Wild Brown Trout for which there is a strict "catch and release" policy in place. Certain other areas are lightly stocked with Brown Trout and these are dye marked on the underside with two blue spots to help identify them - click here for example. These are the only fish that may be killed on our waters up to the current bag limit. All Wild Brown Trout (unmarked) and Grayling must be returned carefully.

Grayling - although not quite as prolific as they used to be, the River Nidd is home to a good population of Grayling. Recent reports suggest that the Grayling population is on the increase - welcome news indeed! They are present throughout all of our water, but Dacre Banks to Summerbridge is probably the most prolific stretch. Grayling fishing is available after the end of the Brown Trout season on 30th September until 14th March. River Nidd Grayling average about 9"-10", with a good fish possibly 14". They are very free rising and rarely refuse a well presented Klinkhamer Special.

Both fly fishing and bait fishing is allowed on our waters, however, there are two "fly only" stretches on the members/season ticket stretches at Glasshouses and Low Green. Please refer to the rules sectionGo to section... before commencing fishing.

The River Nidd is quite a small river so for flyfishing a rod of about 7' to 8½' is recommended. Longer rods may prove problematic as much of the river flows under a canopy of trees, mostly Alder. Rods rated #3 to #5 would be most suitable.

Flies - many flies work well on the River Nidd and your usual favourites will suffice. Among the best flies to use are North Country Spiders, which can be used with confidence, especially during a hatch of naturals. Probably the most outstanding spiders are the Waterhen Bloa, Snipe and Purple and Partridge and Orange. Nymph fishing can, at times, be deadly, especially in the faster flowing sections and a good imitation of a natural nymph will always catch fish. Weighted nymphs can be useful, especially after the water level has been raised slightly by rain, and throughout the Autumn and Winter months for Grayling. By far the best nymphs most of the time are those that contain something flashy in their dressing e.g. gold and copper heads, flashy ribs and hot spots. This is probably due to the slight tinge of peat colour that the River Nidd always carries.

The River Nidd is probably most famous for its dry fly fishing. The Trout and Grayling can be found rising throughout the season from opening day to late autumn/early winter given suitable conditions and can be caught on a wide variety of dry imitations. The best approach, as with any dry fly fishing, is to match the hatch. This can at times mean going very small to match the abundant tiny midges and smuts of the River Nidd. Small CDC's, Black Gnats, Aphids, etc, are taken well, as is the well known Grey Duster. Emergers work extremely well on the River Nidd, the famous Klinkhamer Special is a particular favourite, especially in smaller sizes. The Klinkhamer will even bring up a deep lying Grayling in the middle of winter with snow and ice on the ground.

Waders/Wading - Waders are recommended for fishing Nidderdale Angling Club's waters, either thigh or chest, whichever you prefer. Felt soles are advisable to combat the slippery rocks which make up the bottom in most parts, studded felt is even better. The River Nidd hereabouts can be difficult to wade with submerged boulders and cobbles. You should take the utmost care when wading and using a wading staff is also advisable.

River Level - The Environment Agency have a gauge at Pateley Bridge which gives an accurate reading of the river's level throughout our length of river. It is advisable to check the level before leaving home, but please bear in mind it is subject to change after the reading is taken, so do consider recent rainfall: River Level Pateley BridgeVisit website... 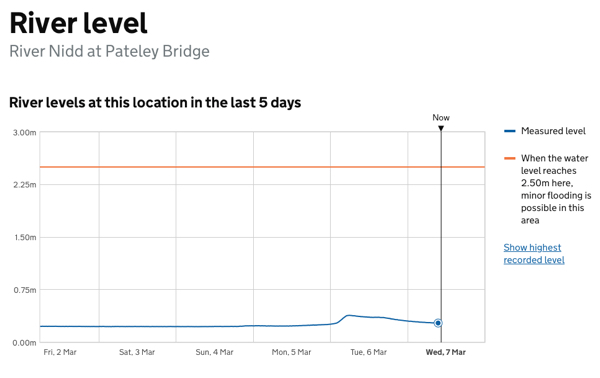 Condensed Map of all fishing 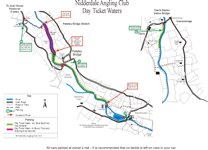